Item #58884 : Original era manufacture. 5x3x1" brass box with the profile of Princess Mary on the lid. At one, time tins like these were filled with either tobacco or chocolate and were presented to the British troops at Christmas in 1914. In November 1914, an advertisement was placed in the national press inviting monetary contributions to a 'Sailors & Soldiers Christmas Fund' which had been created by Princess Mary, the seventeen year old daughter of King George V and Queen Mary. The purpose was to provide everyone wearing the King's uniform and serving overseas on Christmas Day 1915 with a 'gift from the nation'. The response was truly overwhelming, and it was decided to spend the money on an embossed brass box, based on a design by Messrs Adshead and Ramsey. The contents varied considerably; officers and men on active service afloat or at the front received a box containing a combination of pipe, lighter, 1 oz of tobacco and twenty cigarettes in distinctive yellow monogrammed wrappers. Non-smokers and boys received a bullet pencil and a packet of sweets instead. Indian troops often got sweets and spices, and nurses were treated to chocolate. Many of these items were dispatched separately from the tins themselves, as once the standard issue of tobacco and cigarettes was placed in the tin there was little room for much else apart from the greeting card The 'tin' itself was approximately 5" long by 3 " wide by 1 " deep with a double-skinned, hinged, lid.The surface of the lid depicts theprofile of Princess Mary in the centre, surrounded by a laurel wreath and flanked on either side by the 'M' monogram. At the top, a decorative cartouche contains the words 'Imperium Britannicum' with a sword and scabbard either side. On the lower edge, another cartouche contains the words 'Christmas 1914', which is flanked by the bows of battleships forging through a heavy sea. In the corners, small roundels house the names of the Allies: Belgium, Japan, Montenegro and Servia; France and Russia are at the edges, each superimposed on three furled flags or standards. Denting to the surface from age and handling, no cracks or tears in the brass, and the lid closes properly. Inside the tin at the time of our purchase, was an original Christmas greeting card which formed part of the contents back in 1915. 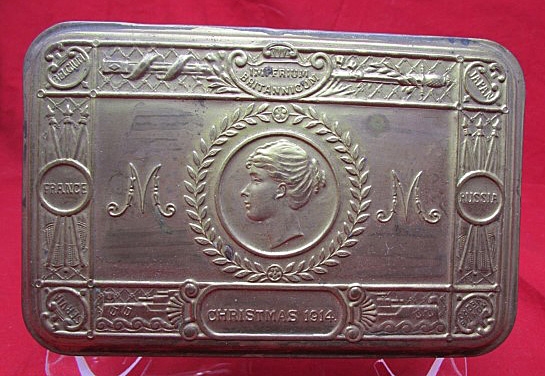 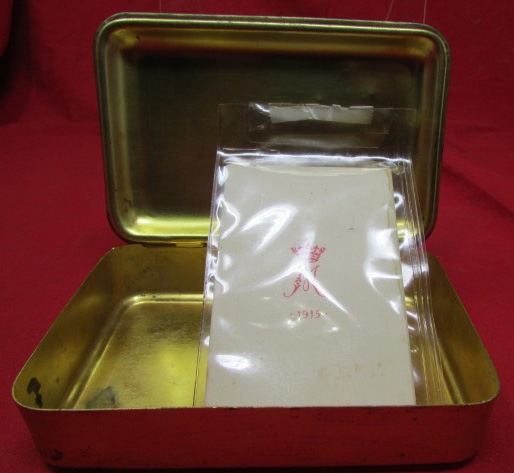 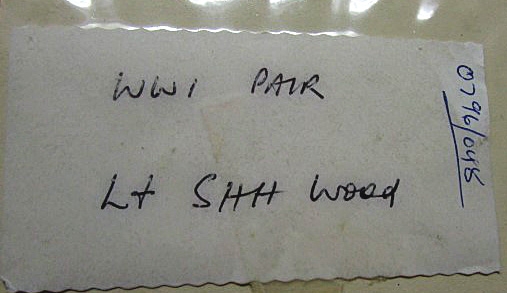 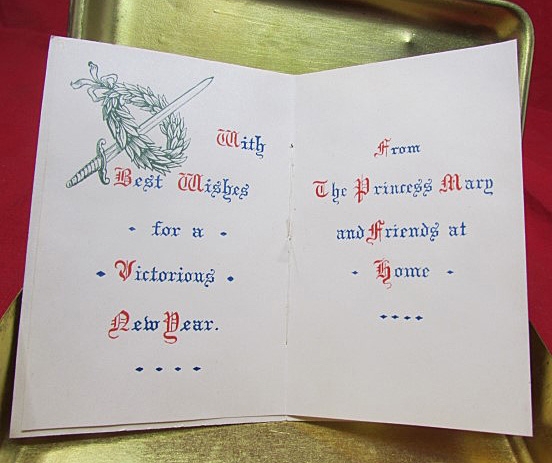