Item #36379 : Original era manufacture. A medal awarded by the former Kingdom of Hannover, to her sons who fought the Prussians to a standstill during the Bruderkrieg of 1866. Although a temporary victory was obtained, Hannover was forced to surrender several days later, with its kingdom and army being absorbed by the Prussian victors. Interestingly, Kaiser Wilhelm I, allowed the former regiments of Hannover to wear all honors and awards to be worn, including the medals of the 1866 war.An interesting feature of the Langensalza medal is that the recipients name appears on the edge, in this instance, A.Widdel. No doubt due to Hannover's long association with the forces of Great Britain, notably the King's German Legion, who served with distinction during the Napoleonic wars. The medals of England nearly always have the recipients name appearing on the edge.One other interesting fact regarding the Langensalza battle was the appearance for the first time of the Red Cross emblem being worn by medical personnel. Our medal is of gilded brass, measuring 35 mm in width, and is without a ribbon. 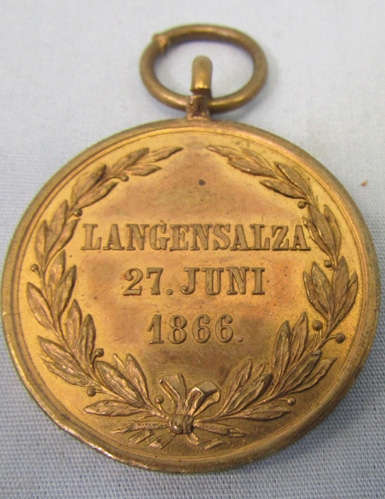