Item #38187 : Original era manufacture. A scarce ammunition belt produced for the US Navy to use with their newly adopted Winchester-Lee, 6mm, straight pull rifle.Woven blue canvas belt, with 12 pockets for five rounds, each pocket cover being made of leather to keep the ammunition in place. Zinc, Orndorff disc on the inside of the belt giving a patent date of '93. The belt is complete with all of its brass fittings including the heavy brass wire C-pattern closure buckle.Six of the original leather pocket covers remain intact, the remaining six are collector replacements, but well done and certainly add to the belt's appeal. The canvas is pliable, no tears or holes, and most of the brass fittings present a dark patina finish. According to sources fewer than 20,000 of the Winchester-Lee rifle were produced for the US Navy, and the reason for the general poor condition of most of the belts found today, was the result of poor storage techniques by Bannerman's, to whom the belts were sold as surplus by the US Government nearly 100 years ago. 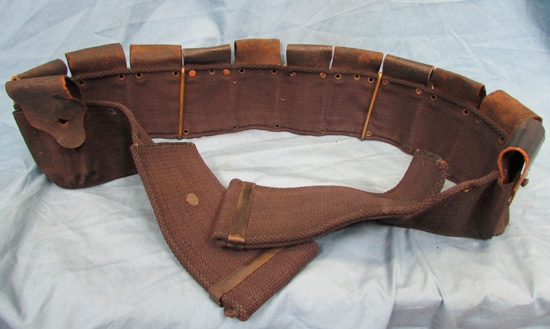